S Alert The S Vision 2032 - Help Us Reimagine Transportation In Stanislaus County Read On About the Plan...

On January 26, 2021 the Modesto City Council and the Stanislaus County Board of Supervisors each approved  the merger of Modesto Area Express (MAX) and Stanislaus Regional Transit (StaRT) forming the new Stanislaus Regional Transit Authority. The merger was recommended after a county-wide Transit Efficiency and Innovations Study was conducted in late 2019. The StanRTA was formed in July 2021 as a result of a joint powers agreement between MAX and StaRT.

In November 2021, StanRTA rebranded the combined system to "The S" with the slogan "Ride The S". A new simplified fare structure went into effect January 1, 2022 that streamlined the previous MAX and StaRT fares into uniform fares valid on all StanRTA routes and services. 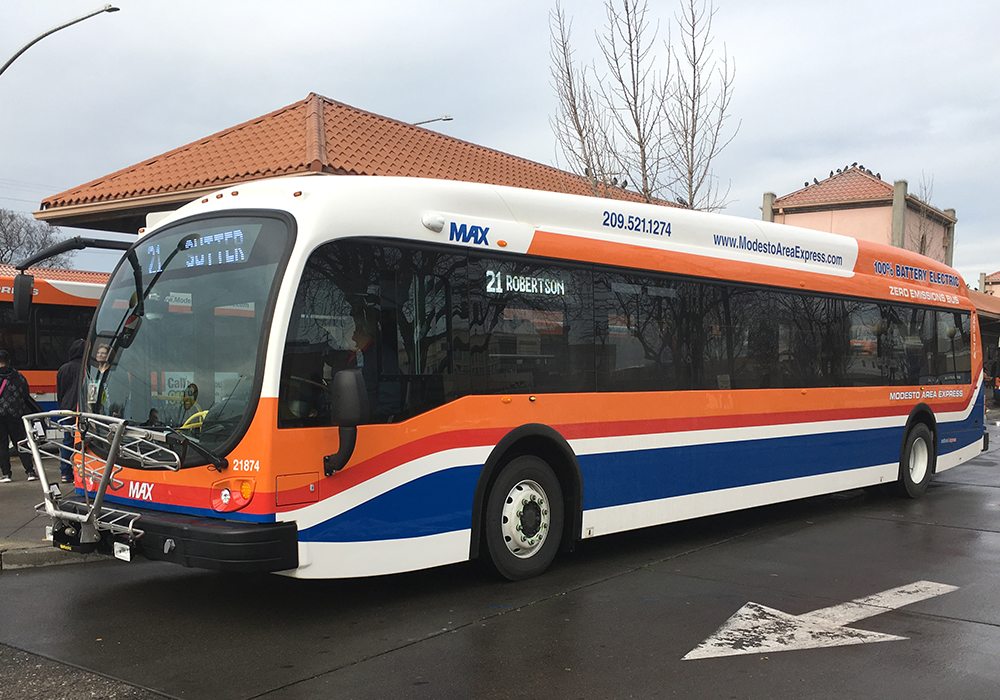 From 1911 to 1917, citizens of Modesto were served by streetcars over the short-line Modesto Interurban Railway, which was first operated intermittently by the Tidewater Southern Railway.  The Modesto and Empire Traction Company was founded on October 7, 1911, and began regularly scheduled passenger service between Modesto and Empire on November 1 of that year.  Passenger service was discontinued in 1917 after freight became more important.

On September 19, 1927, the City of Modesto launched its first transit service (known as City Transit Company), which was a privately owned enterprise with one bus. City Transit Company ran on a 30-minute schedule and soon added two additional twenty-passenger buses to serve the entire City. In May 1928, the service also began allowing children under the age of ten to ride free when accompanied by an adult. However, the system struggled to be profitable and had difficulty keeping liability insurance as required by the City.

In 1955, the Modesto Motor Bus Service further expanded to include additional areas without public transportation. For the first time, the Greater Modesto area now had a consolidated transportation service. The operation was set up on four routes in a cloverleaf pattern.

During this time of transit growth, local bus schedules were printed in booklet form (containing not only the timetables but maps of each route as well). Also in 1955, negotiations started with City officials for the installation of bus stop benches for the convenience of passengers. As an extra added service to its passengers, timetables were painted right on the benches.

In the late 1960s, the City became directly involved with public transit in an attempt to maintain the profitability of the private transit company. By 1968, the buses used by Modesto Motor Bus Service were old and unreliable, requiring a high level of expensive maintenance. The City obtained a federal grant to purchase four new buses, which it turned over to the private company to replace its aging fleet. The new buses reduced operating expenses and attracted new riders which enabled the company to stay in business.

However, by 1973, the Modesto Motor Bus Service could no longer continue profitably. No buyers were interested in acquiring the business and it was about to shut down when the City concluded that public transportation was too important.  The City acquired the service, rebranding it as Intracity Transit (IT). At the time the City acquired the service, it was carrying only a few hundred thousand riders per year.

The City continued to invest in public transportation, and in 1990 Modesto Area Express (MAX) was adopted as the new name to replace Intracity Transit. Prior to its merger with StaRT, MAX served approximately 2.6 million passengers annually and operated daily. The total MAX Bus Fleet was made up of 61 buses; including five battery-electric zero-emission Proterra buses and four over-the-road MCI commuter coaches that operated on the ACE Commuter and BART Commuter routes. In addition to fixed-route transit service, MAX also operated the Modesto Area Dial-A-Ride (paratransit service), also known as MADAR. MAX buses traveled over 1.8 million revenue service miles per year.